Creative industries can be ‘a catalyst for post-pandemic recovery’

Despite billions in losses due to the coronavirus pandemic, the UK’s creative industries can lead the post-COVID recovery if the right investment is unlocked.

That’s the big headline in a major new study by the Creative Industries Federation and Creative England, which together comprise the non-profit Creative UK Group.

The organisations’ report, The UK Creative Industries: Unleashing the power and potential of creativity, found that the pandemic has hit our sector hard.  Creative industries are estimated to have lost almost £12bn in GVA, with job losses predicted to reach over 110,000 by the end of the year.

Freelancers have suffered five times as much as those on payroll, with 95,000 freelancers losing jobs compared to 18,000 employees. Creative organisations reliant on footfall, such as museums and performing arts, has been the hardest hit sub-sector, whilst the creative industries in the North East and Wales are expected to be slowest to return to pre-pandemic levels.

But despite such a devastating impact, the impact could have been much worse. The report said UK, devolved and local government support, such as the £1.57 billion Culture Recovery Fund, have been “enormously instrumental” in preventing the 400,000 job losses that the Creative Industries Federation warned of in June 2020.

“We must invest in creativity”

As Britain looks to recover from the pandemic, Creative UK Group said the creative industries need to be at the heart of the government’s plans.

Included in the report is new data from Oxford Economics which showed that before the pandemic, the creative businesses directly supported more than one in 10 UK jobs. As well as the 2.1m pre-pandemic jobs in the sector itself,  another 1.4m roles were directly supported through its supply chains.

Oxford Economics also estimates that for every £1 the creative industries before the COVID-19 outbreak, an extra 50p was generated in the wider economy via supplying businesses. That amounts to a combined economic contribution of £178bn.

The report said that with the right investment, the sector could recover faster than the UK economy as a whole, growing by over 26% by 2025 and contributing £132.1bn to the economy in GVA. That’s £28bn more than in 2020, and more than the financial services, insurance and pension industries combined.

By 2025 the Creative Industries could create 300,000 new jobs which is enough new roles to employ the working-age population of Hartlepool and Middlesbrough twice over. 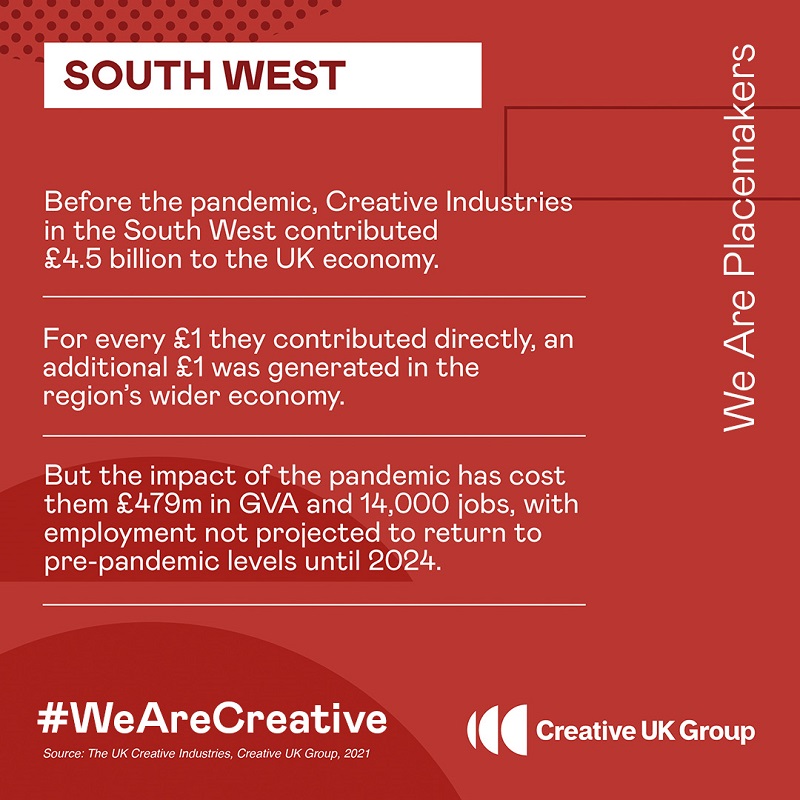 “The past decade has seen the creative industries achieve remarkable growth and success with the sector’s vast power to grow wealth and employment extending throughout local communities across the whole of the UK.

“With ambitious investment, the creative sector can rebuild faster than the UK economy and make a major contribution to the country’s post-pandemic recovery. We are money makers, job creators, innovators and problem solvers. We can reshape this country’s future for the better, but to realise our ambitions for tomorrow, we must invest in creativity today.

“We are not asking for handouts. We are asking for meaningful, targeted investment in creative ideas, creative industries and creative skills, that can unlock the incredible potential of the creative sector to kickstart our country’s recovery, and that will be repaid many times over.

“It is critical that we seize this opportunity to unlock the UK’s incredible creative potential, and avoid leaving key parts of our sector – and our country – behind.”

“The UK is world renowned for its creative industries, which in turn make it an attractive place to live, work and invest. Human creativity, unlike so many of our natural resources, is limitless – so it makes sense to invest in its potential to transform lives, level up and build sustainable and inspiring futures for many.”

Recommendations to support the creative industries

The report contains several ideas for how the creative industries can be supported. They include:

The report outlines in statistics the make-up of the creative industries which show just how important it is.

Although the UK is world-renowned for big creative names such as Tate, Burberry and Working
Title Films, the creative sector is predominantly comprised of small businesses, micro-businesses and freelancers. As the report says: “Together we punch above our weight in terms of impact.” 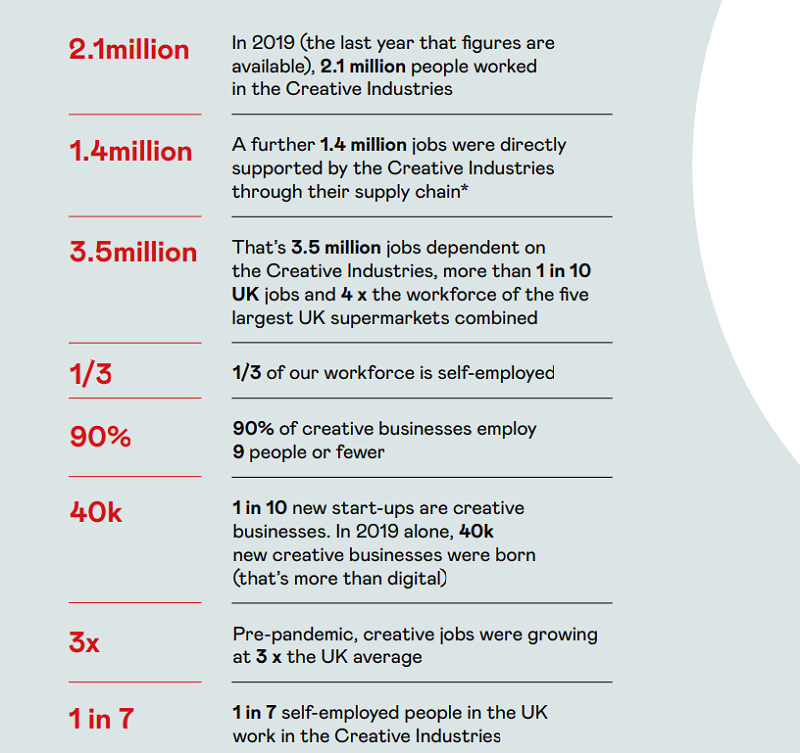 There are thousands of examples of businesses pivoting and adapting to deal with the impact of the pandemic. We are delighted to see a Bristol initiative featured in the report:

“The immersive cinema group Compass Presents, whose planned productions were cancelled during the pandemic, brought the skills and knowledge they’d gained through immersive practice to disadvantaged communities in partnership with Knowle West Media Centre. Supported by BFI Film Hub, the organisation delivered 12 weeks of training in immersive screening to a group of young people in South Bristol, culminating in them organising their own immersive event for their local community.”

Ahead of the government’s Spending Review, Creative UK Group is calling on creative business owners and employees to highlight the importance of the sector to their MP.

To do that, it has launched the #WeAreCreative campaign.

You can download a draft email to send to your local MP and ask them to sign up to the pledge to support the creative industries.

You are also encouraged to shout about the sector on social media. We’d love to see Bristol Creative Industries members getting involved. Use the #WeAreCreative hashtag and tag us and your MP. We’re on Twitter, Instagram, Facebook and LinkedIn.

You can use the tools here to create your design. You are encouraged to start your post with ‘We Are…’ to “build a recognisable campaign that simply cannot be ignored”. 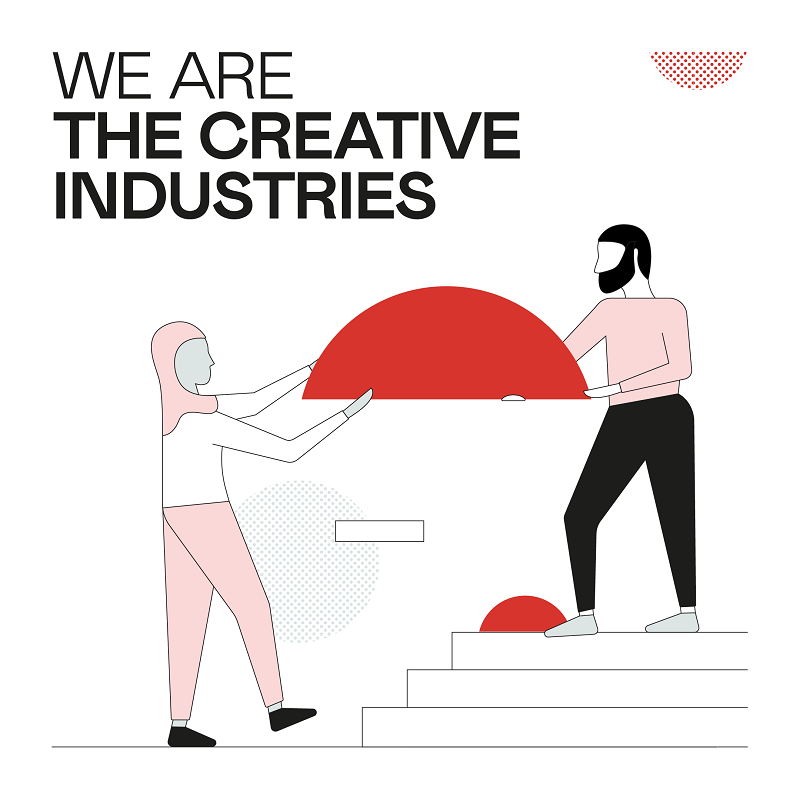