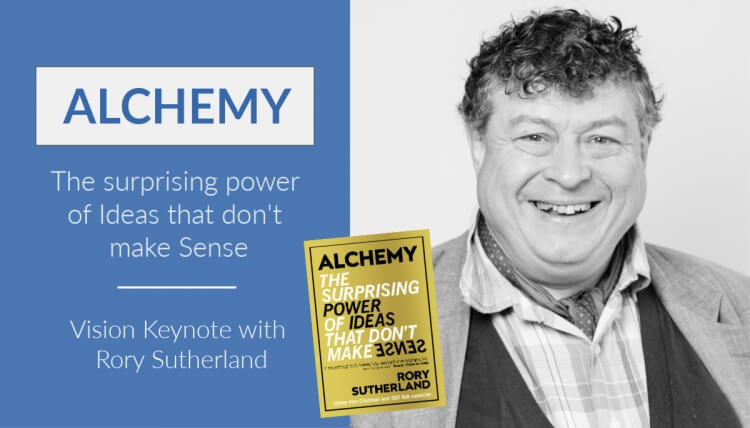 Join us & Ogilvy's Rory Sutherland for a keynote to discuss his book 'Alchemy: The Surprising Power of Ideas that don't make Sense'

*This event is now SOLD OUT. Please add your name to the waitlist and we’ll confirm if a ticket becomes available*

Humans are innately illogical, and make unconscious decisions based largely on our emotions. Yet when confronted with a business or personal challenge, we have become obsessed with absolute logic, rationality, algorithms and data, and it’s threatening to stunt us: politically, socially and economically. What if there were an alternative to logic and rationality –a ‘psycho-logic’–that was far more pervasive and powerful than we realise, and when employed correctly, creates the kind of magic (or alchemy) most businesses or economists can only dream of?

Join us for a keynote with Rory Sutherland, the legendary Ogilvy Vice Chairman, the ‘Don Draper of the UK’, and one of our most acclaimed behavioural economists, who will share insights into his book ‘Alchemy – The Surprising Power of Ideas that don’t make Sense.’

Sutherland will use real case studies from his work and research with the world’s biggest brands and influencers, to reveal how we must learn to identify and understand the basics of ‘psycho-logic’, to get ahead in the modern world.

Tickets are 45+VAT for Bristol Media members (£60+VAT for non-members), a limited number are available to Bristol Media Freelance Members for £25+VAT.

Tickets include a buffet lunch and a copy of Rory’s book ‘Alchemy: The Surprising Power of Ideas that don’t make Sense’ to take away.

Rory is the Vice Chairman of Ogilvy, an attractively vague job title which has allowed him to co-found a behavioural science practice within the agency.

He works with a consulting practice of psychology graduates who look for ‘unseen opportunities’ in consumer behaviour – these are the very small contextual changes which can have enormous effects on the decisions people make. It is a hugely valuable activity – but, alas, not particularly lucrative. This is because clients generally do not have budgets for solving problems they have not noticed.

Before founding Ogilvy Change, Rory was a copywriter and creative director at Ogilvy for over 20 years, having joined as a graduate trainee in 1988. He has variously been President of the IPA, Chair of the Judges for the Direct Jury at Cannes, and has spoken at TED Global. He writes regular columns for the Spectator, Market Leader and Impact, and also occasional pieces for Wired. He is the author of two books: The Wiki Man, available on Amazon at prices between £1.96 and £2,345.54, depending on whether the algorithm is having a bad day, and Alchemy, The Surprising Power of Ideas that don’t make Sense, published in the UK and US in March 2019.