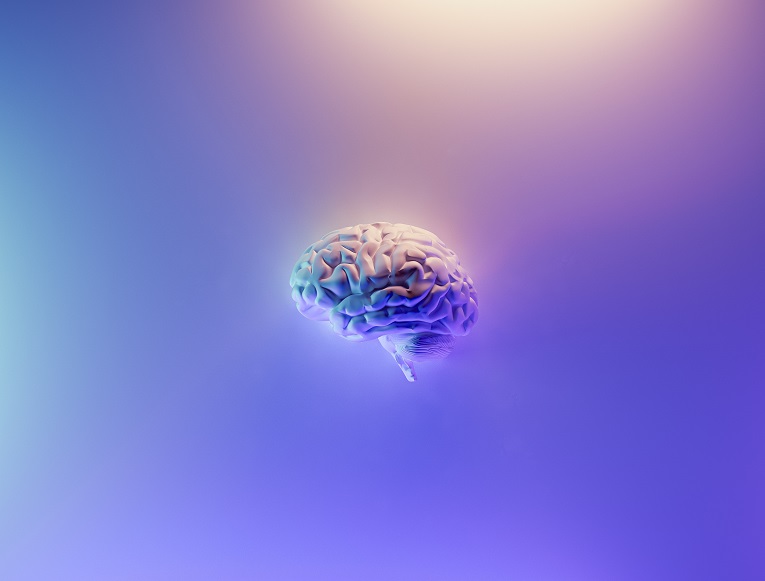 How mind science can help your creative campaigns

Anne Thistleton, the founding partner of LIGHT Consulting who has spent over 20 years as a marketing practitioner in the field of mind science, joined us from South Africa for an online event where she shared fascnating insights about how understanding the way the human mind works can help creatives build more effective campaigns. Dan Martin summarises her brilliant advice

Anne opened her talk with the story of the 2007 experiment which saw world-renowned violinist Joshua Bell pose as a busker in a Washington DC subway. Despite usually being able to command audiences paying thousands of dollars to see him play, out of 1,097 people that passed by, just 27 gave him money, and only seven stopped and listened for any length of time. In total, he made $52.17, $20 of which was from one person who did recognise him.

So why did that happen? “People didn’t hear him because we don’t hear with our ears,” Anne said. “We listen with our ears, but we hear with all of our senses. They are constantly sending information into our mind, enabling us to connect the outside world with our memory and make sense of the world…influencing how we act and how we react.”

The people in the subway, Anne explained, were getting clues about what was going on at an unconscious level. They were telling them that they were in the subway and connecting with memories of seeing past performers who they passed by and didn’t have time to stop and listen to. Joshua Bell was just another busker.

In Australia, Mcdonald’s increased the price of a cup of coffee from $1 to $2 and sales doubled. A colleague of Anne’s visited and said the “coffee even tasted better.”

A study of a Cinnabon store found when someone was close enough to take in the aromas of the bakery products, they were three times more likely to help someone with a problem or question compared to customers in other parts of the shopping centre.

In a print ad for a delivery company, a clock was put on the wall in the image. It was “a clock that no one can consciously recall but when asked to describe what they remember from the print ad, expectations of speed and service increased by 50%”.

During a two week experiment in a supermarket, French music was played for the first week and 77% of wine sales were French wine. The next week they played German music and sales of German wine increased by 73%.

A study by a team of Yale professors showed that when an offer price by a customer to pay for a new car was rejected by the salesperson, buyers sitting in a soft chair at a car showroom increased their offer by 40% compared to those sat on a hard chair. 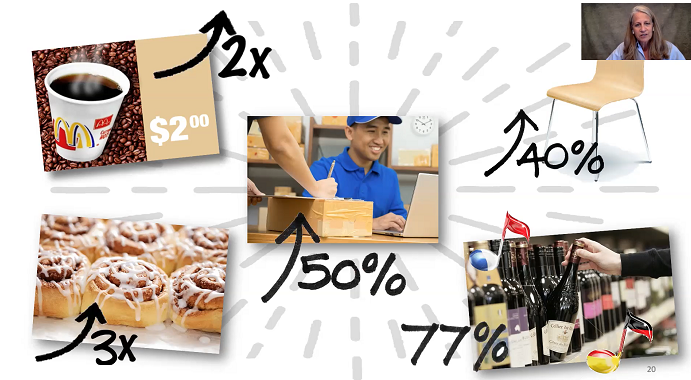 Why did all that happen?

“While we as marketers have been stuck in the dark ages of decision making, the good news is that there has been a complete explosion in mind science and how the brain works,” Anne said. “And the undeniable headline is humans are not rational decision makers. We’re not even rational thinkers.”

Take the example below. If you were asked out of the two tables which one you’d like to take a nap on and which you’d prefer to eat pizza from, you’re likely to pick the one on the left for the first question and the one right table for the second. But as the image shows, they are exactly the same size. 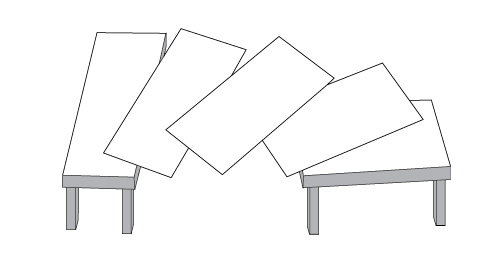 This file is licensed under the Creative Commons Attribution-Share Alike 4.0 International license.

“Even though the image shows the tables are the same size, you still can’t see it,” Anne said. “It demonstrates that in many instances we are still unable to see things in a logical, rational manner.

“Our mind is the most complex system in the world. But with just a few basics, I believe it can materially change how you look at communication.”

The science behind why the above results occurred can be explained by mind science. Watch this video with Anne outlining it in detail:

Now we know how the science works, here’s why the results above in the five examples occurred:

Cinnabon: “Aromas of fresh baked goods lights up powerful memories of home and family which makes you feel good. So when someone asks you for help with something, you’re going to do it because you’re already in a much better mood.”

Delivery company print ad: “In Western society, clocks have become associated with timeliness. The clock implicitly lights up this idea and the core message of speed and service, which is exactly what the company is trying to do with that print ad. Even the background items, the ones you can’t recall, are picked up by our non-conscious processor and can have a significant impact on the message.”

Wine sales: “Just like the clock on the wall was bypassing the customers’ conscious visual processor, the French and the German music wasn’t consciously registering either but it was lighting up those ideas via people’s auditory processor. French or German-related memories were guiding customers to those specific shelves.”

Car buying: “We take on information through our sense of touch all the time, whether actively as we’re touching something or passively such as being seated in a chair. It turns out that the hard chair equals a hard heart. It triggers feelings of duty, stability and toughness. For your next salary negotiation, may I suggest you look for that hard chair so that you don’t give it too easily.”

Anne concluded: “The important thing for all of this is that it’s the non-conscious processor that’s wielding the enormous influence. That’s what’s driving so much of our decision making. That’s where the power lies.”

Actions you can take

So what steps can you take to use mind science to improve your marketing and creative campaigns?

Ask what you are lighting up

For every piece of communication you send out, ask what are you lighting up and do it from all of the five senses. Do a sensory audit, Anne said. “Think through every single single sense and it’ll be amazing what it will eliminate.”

Be very wary of research

“Focus groups, online mobile surveys, brand tracking. The problem is these traditional methodologies are all talking to the conscious processor because we thought that’s what drove action. But remember, when you talk to the conscious processor and you ask people who’ve just bought either French or German wine did music influence your choice, 86% are going to say no. But that’s isn’t the case because you monitored the behaviour and the only thing that changed between one and two was the music.”

Examples of research which led to failures include Heinz’s green ketchup. The company failed to understand how colour influences a decision, Anne said.

‘New Coke‘, a new recipe for Coca Cola, is another example. “It was the most highly researched new product of its time; 40,000 interviews and $4m spent. It was an incredible disaster because they didn’t realise they were talking to the conscious mind. The brand is so much more than just what is inside the can and defined by a taste test.”

Connect with the non-conscious processor

The first principle for connecting is that it must be easy, tell simple stories and don’t make them hard to understand. “Stories are the glue of our memories,” Anne said. “It is how knowledge was transferred before the written word. Stories speak to the rhythm and the patterns of our mind.”

Secondly, it must be sticky. Make it memorable. “It’s got to get into long term memory to drive behaviour,” Anne said.

Thirdly, you must then repeat and repeat until it makes a strong connection. 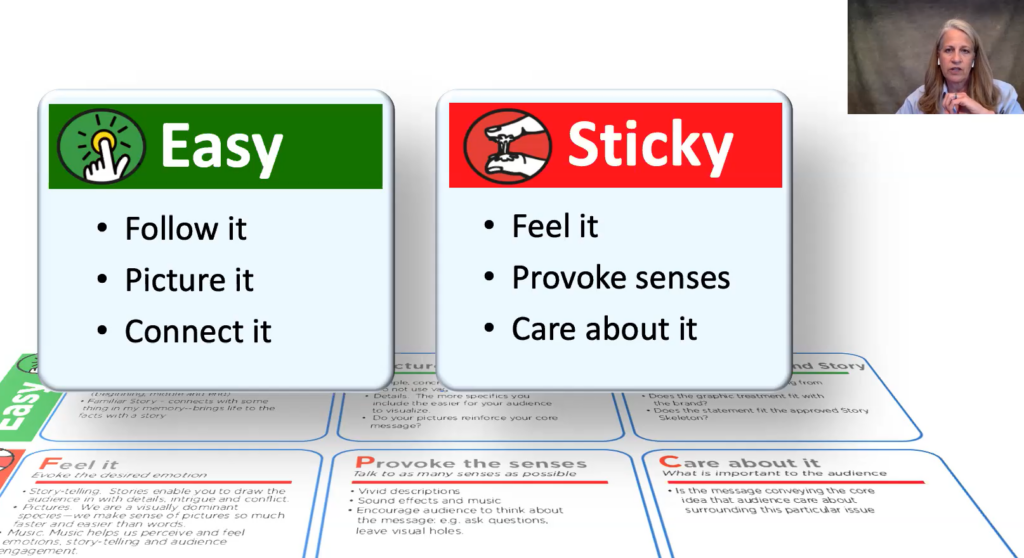 An example of an advert that follows the principles above is this one:

“The ad tells a story,” Anne said, “but they also weren’t afraid to leave things out and because they did that we can co-create, we can picture ourselves in it and we can feel it.”

Harness the power of your non-conscious processor

Marketers and creatives should harness the power of their own non-conscious processor because that’s where your creativity and your imagination lies.

Anne said: “You have got to find your mental playground. Find a consistent time and place with no phones, no music, no friends, just you so you can cultivate your creativity and your imagination. That’s the core of your livelihood.

“One thing you don’t want to do is brainstorms. They go so quickly that you’re only tapping into your conscious processor. That’s not where your power for ideas lies. Also, a typical rule of brainstorming is no criticism. You actually want criticism. I know this almost sounds like sacrilege, but you want criticism because you’re trying to expand your mind. You’re trying to get to the parts of the mind that don’t often get tapped into.

“You need to use criticism because when you hear something, it lights up a different part of your mind, it fires in new ideas, and you start to connect that to what you already know.”

Taking us back to the first story at the start of her amazing talk, Anne concluded: “We are all Joshua Bells. We all need to be heard and mind science provides that powerful learning to enable us to be heard.

The creative industries contribute to making Bristol and Bath amazing places to live and work. But how can they grow and prosper? Tell us in our survey here.