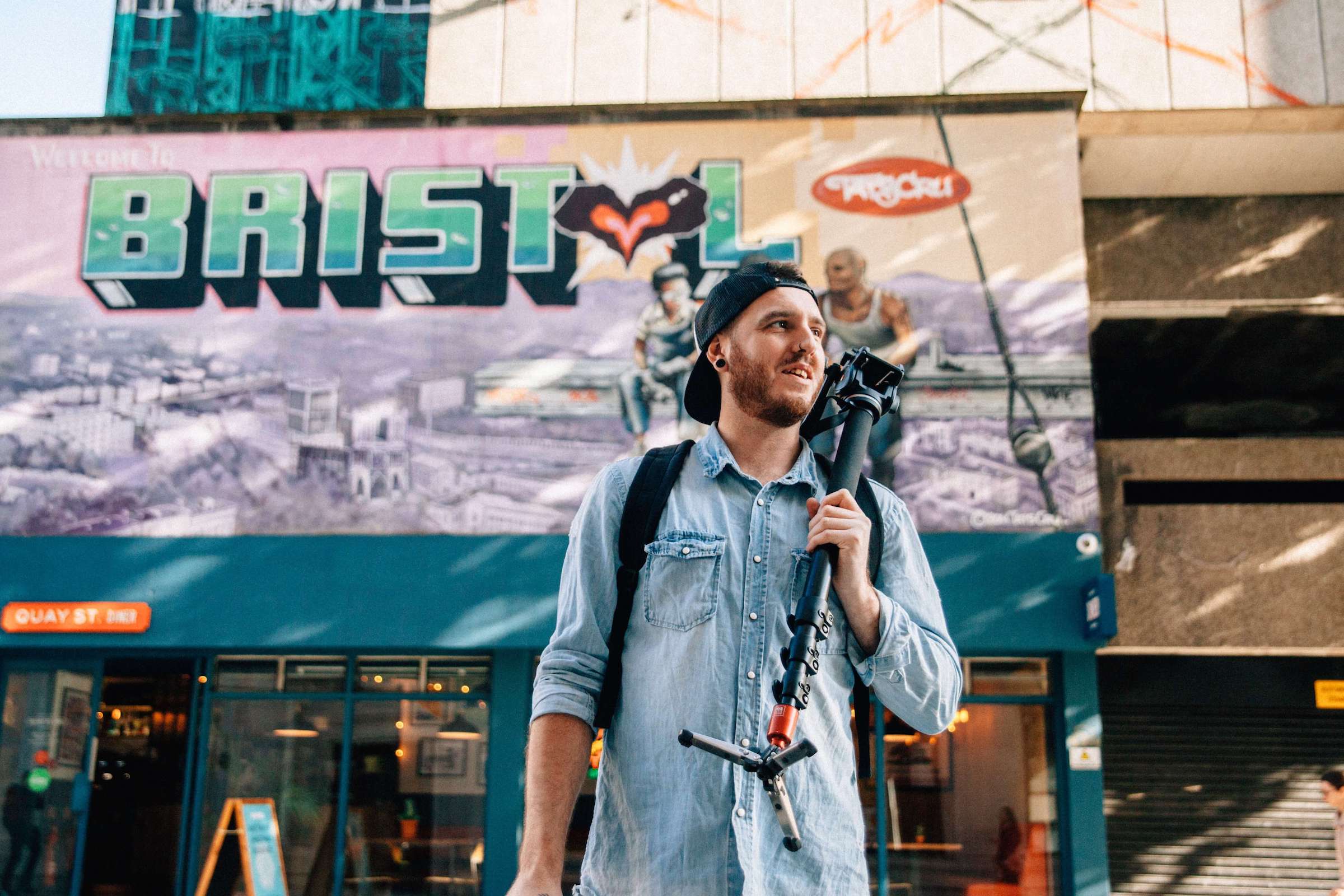 Our City is Bristol Media’s annual short film competition for young people. In collaboration with local industry partners, Our City is a chance for students and/or individuals under the age of 30 to create a 90-second film or animation that showcases the city of Bristol.

Since winning Our City 2018, winners Patch De Salis and Michael Doran have been busy creating new content and gaining experience with top production agencies in the local area. We spoke to them to find out more about the inspiration behind their films and what they’ve been up to over the past year.

“I originally saw the ‘Our City’ competition advertised at a networking event. It looked like a great opportunity that I wanted to be involved in, so I started planning what was to become ‘BeBristol’.

“I knew right from the get-go that I wanted to feature my friend Urban Mckenzie (the star cyclist) in the film, since we had worked together before and he would tie my selected scenes of Bristol together nicely.

“My brother Wilfred de Salis offered to compose the music and co-direct the film, so I graciously took up his offer as he is an excellent film composer. We contacted friends, clubs and groups to showcase in the film before we began filming. It was important to me to show varying locations, cultures and people.

“The highlight of my experience has been the exposure, which has led to current work. I have been filming for various clients and musical artists, as well as creating my own films and working towards starting my own limited film company. My most recent film featuring Bristol’s acclaimed rap artist ‘Jay0117’ is about the day in the life of an inner-city Bristolian, reflecting on societal issues, lifestyle and UK culture. (Check it out on YouTube – Jay0117 – A Day In The Life.)

“The companies I met along the way that provided work experience have been a great influence and I hope to gain future collaborations with them.”

“I heard about Our City on Twitter in 2017. I follow Marvin Rees and he tweeted about the opportunity. However, I knew for my idea that I needed to film the city’s summer festivals and by this point I’d missed that opportunity, so I waited until the competition returned the following year.

“I watched a video on YouTube made as part of Detroit’s pitch to Amazon to have their new HQ built there (obscure, I know!). It celebrated the history and culture of Detroit in a way which I believed lots of the tourism videos of Bristol available online were missing. Needless to say, I was massively inspired and felt I could use this as the foundations of the film!

“The montage nature of my film meant filming across the year at a variety of locations and events. It was the first time I created a film whereby I had to collate footage in this way which was a great experience in itself. However, it also taught me how to keep motivation going on a project once you’re over a year into it.

“It was also my first time collaborating with another creative, my incredibly talented friend and fellow Bristolian Joey Mitchell who wrote and performed the words for the voice-over. This was an invaluable experience as it opened my eyes to the potential of working creatively with others as prior to the competition I’d only ever worked by myself.

“Of course, the prize money was also very useful as it enabled me to invest in some new equipment which has further improved my production quality.

“Since winning, I’ve completed my A Levels and began my gap year, I’ve been undertaking several other projects and doing some freelance work. I’ve also completed a week’s work experience at Icon Films – an opportunity that I was fortunately offered thanks to the competition and its partners.”

Entries are now open for Our City 2019

We’re now welcoming applications for this years’ Our City competition, and the deadline is the 30th November. To help anyone wishing to apply, we asked Patch and Michael if they had any advice for future applicants:

Patch: “If I could give a piece of advice to future applicants, it would be to try and show Bristol in the unique way that you see it rather than accommodating to an audience in an un-natural light.”

Michael: “I would say get shooting! I was fortunate as I had a clear vision however that is often rare. Sometimes you just need to get out there and shoot and an idea will come to you. If like me, you do have a clear vision, then don’t beat yourself up if the end product isn’t quite what you imagined – it rarely is. In my opinion, that’s all part and parcel of being a young creative!

“In addition, don’t be afraid to ask for things (politely of course)! I shot many of Bristol’s events with a media pass that were kindly given to me by the events and their media teams. This also opens up the opportunity to make new contacts who you can potentially work with in the future.”

The brief is to produce a 90 second film or animation that captures your view of Bristol and what makes Our City the most creative, rebellious, diverse and pioneering place to be. Submit your entry by clicking the link below – you’ll need to provide an online link.

The winner receives a £1000 prize and the opportunity to work with local partner companies to build your skills and experience. Competition closes on 29th November 2019, we’ll announce the results of this year’s competition in December.