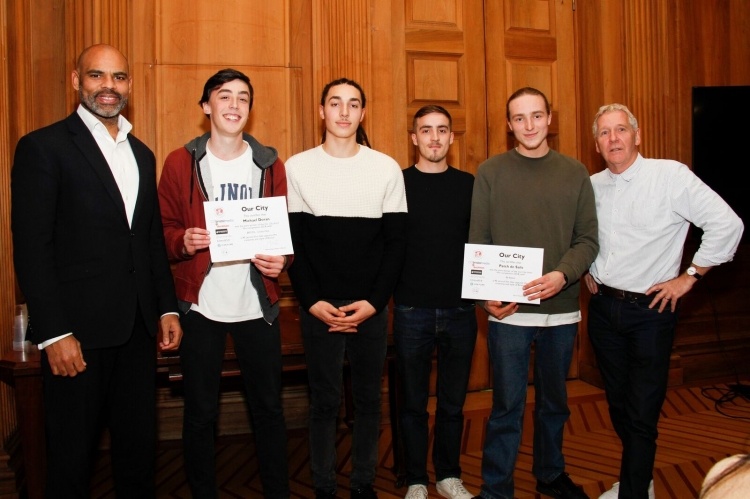 Last week the winners of the ‘Our City’ 90 second short film competition were presented with their certificates by Mayor Marvin Rees.

Young filmakers under 30 were asked to produce a 90 second film, animation or motion video which captured their view of what makes Bristol THE place to be – celebrating creativity, people, music, technology, action, collaboration or lifestyle.

The judges were also impressed by :

‘Bounty on the Bear‘ by Peter Shepherd

‘A Bristol Ballad‘ by Alice Smith

‘Baking Bristol‘ by Charlotte B Blondel

A special mention went to Creative Youth Network for ‘A Youthful City‘– the only under-16 entry.

“The Mayor’s Our City short film competition is a brilliant showcase for the talented, young film-makers that live in Bristol. Many of this year’s entries were truly inspirational and the teams that made them brim over with imagination and talent.“

“This is the second year that Doghouse has sponsored the “Our City” Film award. The standard over the past two years has been incredibly high and the emerging young talent of the city continues to highlight why the media sector in Bristol is of a world class standard.”

“This year the quality of the entries was very high, encouragingly so for all us companies that are constantly looking to bring the next generation of talent into our companies.  The winners stood out through their joyful, original, creative portraits of our City.  Icon Films are proud sponsors of this competition and look forward to spending time with the finalists and sponsoring again next year.”

“It’s great to be part of this competition that taps into a group of young film makers from across the City – many of whom have had no formal training but as you can see from the winning films have  produced some fantastic work. For us as a company we are always looking for new diverse talent and are really pleased to have the opportunity to grow relationships with many of the film makers involved in the scheme.”