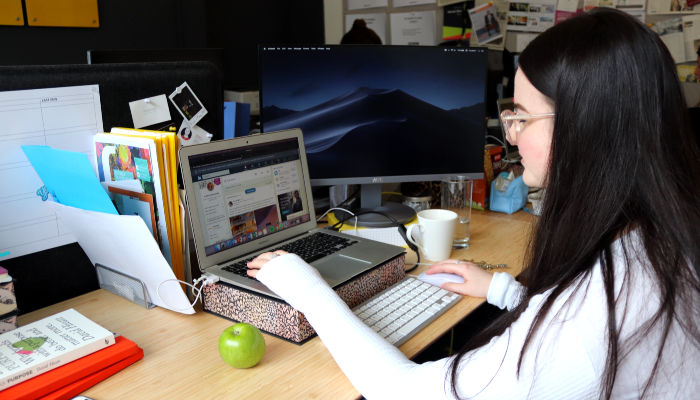 My Apprentice story so far…

Izzy joined the team as Junior Content Producer Apprentice for Bristol Media & Ambitious PR just over four months ago and has been a fantastic addition, bringing news skills, a fresh perspective, and you may have even seen her behind the camera at some of our events! She’s provided an update of the last four months and what she’s looking forward to from now until December.

The story so far: by Isobel Bryant

I’ve really settled into my apprenticeship role with Bristol Media and Ambitious PR, the time has flown by! With National Apprentice Week this month and my 4-month job anniversary, I’m updating on my journey so far…

Why did I become an apprentice?

I decided to become an Apprentice whilst I was in my final year of studying Media at college and working part time. When I initially chose college as opposed to A levels, all I knew was that I wanted to work in the creative sector. At the time, an apprenticeship hadn’t even crossed my mind as I thought they were typically only available in engineering or construction, and I was always told that apprenticeships were a last option if you didn’t get the right GCSE’s.

When my college classmates began applying to universities, I began looking for full time jobs. I found that after browsing through Indeed and Totaljobs with the keywords ‘creative’ or ‘digital’, every job that cropped up required experience. I went along to university open days and was tempted with the promise of higher paid jobs if I had a degree, but I wanted to start working as soon as possible and university had never interested me.

A friend of mine had finished an apprenticeship in business admin at the start of my second year of college and was offered full time job within 2 weeks. I was shocked at how easily she found a job, especially since she was still 17 like me, shortly after, I decided to research apprenticeships in Bristol. After reading through some job descriptions and requirements, I realised that it was a perfect fit for me. Many of the roles didn’t require experience and I would get an extra qualification by the end of it.

This was when I found a vacancy for a Digital PR & Content Apprentice for Bristol Media and Ambitious PR on the GOV.UK Find an apprenticeship site. The course I would take alongside the job was what initially attracted me, because my ‘lessons’ were taught by actual industry professionals, and the role was also one that would allow me to put my current skills to use (eg, video and photo editing).

How is it going?

I’ve been working for Bristol Media and Ambitious for 4 months now, I spend 2 days a week with each business then a fifth day with Cirencester College. I didn’t expect to be given as much responsibility as I have, but I’m happy that I have, as it’s given me the opportunity to prove to everyone what I’m capable of.

A part of my job that I’ve really been enjoying is the evenhttps://www.bristolmedia.co.uk/ts that Bristol Media host, I’ve had the chance to see and meet so many speakers and leading industry professionals. One event in particular I found interesting was a Focused Minds Vision keynote by Ros Boughtflower, where we learnt meditation techniques to improve our focus and performance at work.

It hasn’t all been smooth sailing though, a challenge I’ve faced has been adapting my writing style. Until now, I’ve not had practise writing with a business tone of voice, so it’s been a bit of a struggle to keep my blogs and social media posts professional, but this is something I’m excited to develop and get better at as even after this job it will be useful.

I look forward to supporting the team with Social Media Week Bristol in June, I’ve never been before so it will be interesting to see how I can get involved. Also in June is the Bristol Media summer party, which will be a good opportunity for me to network with some of the members, and hopefully get some new industry contacts.

My apprenticeship finishes in December so it is important that I make the most out of my time with both teams and learn as much as possible from them to improve my chances of getting a full-time job afterwards. But for now, I’m excited to carry on developing my skills and finding out more about the creative sector in Bristol.