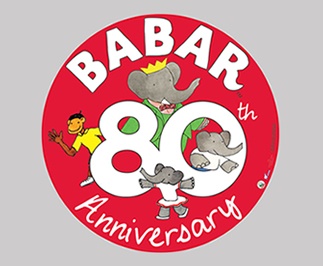 The Consumer Products division of ITV Studios Global Entertainment and Nelvana Enterprises have appointed Bath public relations agency Highlight PR to manage a consumer PR campaign to promote the 80th anniversary of Babarthe Elephant in the UK during 2013.

Whilst celebrating this milestone, the campaign aims to re-engage fans with this classic book-based character, build awareness amongst new consumers of all ages, and create a demand for ITV’s planned product roll-out.

Highlight will use a mix of media relations, social media and product placement to support the brand, leading up to a birthday celebration and retail event in Q3.

In 1931, The Story of Babar, the first book in the series by Jean de Brunhoff, was published in France, however it was not until 1933 that the books appeared in the UK.

After Jean de Brunhoff’s death in 1937, his son, Laurent continued creating the books. Over the years Babar grew into a worldwide brand, published in 17 languages, with film and TV adaptations. Babar: The Adventures of Badou is currently aired on CiTV. Laurent De Brunhoff is still alive today, aged 85.

Global celebrations leading up to the 80th Anniversary kicked off in Paris in December 2011 with a retrospective exhibition of artworks and memorabilia spanning eight decades. This was followed by a month of celebrations in New York in November 2012, which included in-store events at Saks Fifth Avenue and the eponymous bookstore, Books of Wonder, as well as the costume character closing the New York Stock Exchange.

“I grew up with the Babar stories and have always loved the character – like thousands of people across the UK. We are delighted to be working with Nelvana and ITV Studios Global Entertainment to promote this anniversary, whilst creating a platform for the first phase of the consumer re-launch. The new Babar vintage range reflects the essence of the beautiful artwork in the books, and chimes with the current trend for stylish, retro interiors.”

Maggy Harris, Head of Brand Marketing, Consumer Products at ITV Studios Global Entertainment said: “Highlight PR has specialist expertise and experience in promoting classic book-based licensed characters, which made the agency an obvious hire on this project. We look forward to working with them and Nelvana on an exciting re-launch of Babar in the UK this year.”

“Babar is an extraordinarily well-loved literary classic – not just in his native France but throughout the world. We believe there is great potential for the brand in the UK; this PR campaign aims to kickstart consumer awareness, prior to the product sell-through.”